Why did I risk arrest 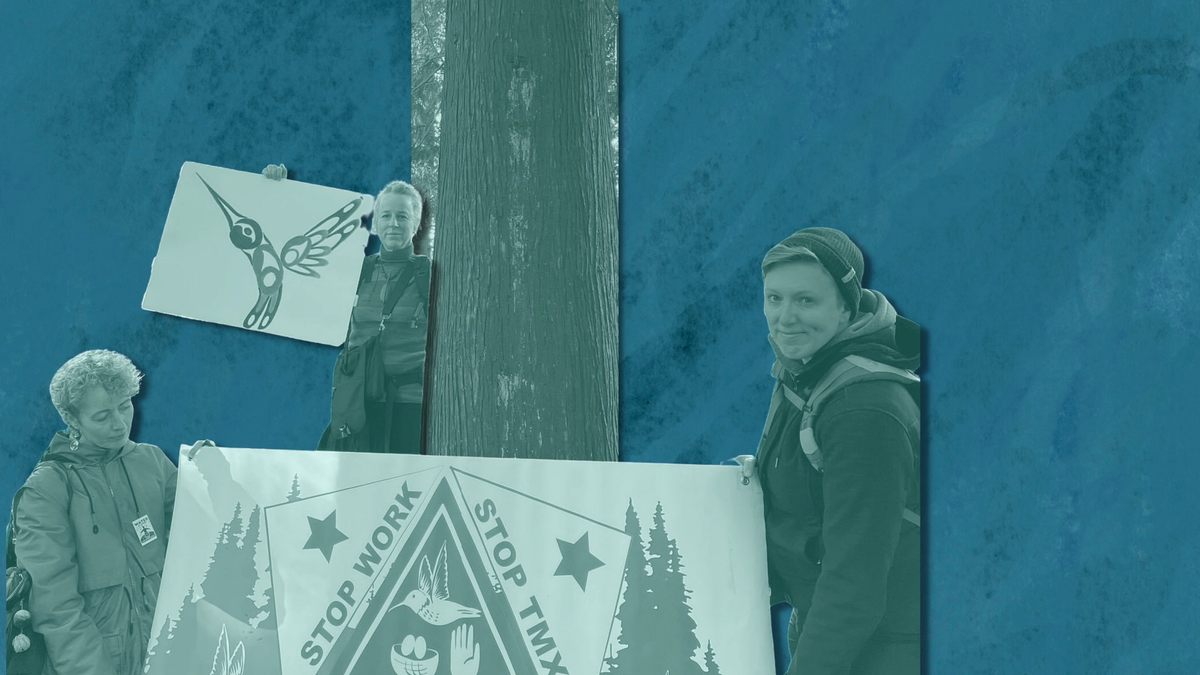 This one is close to home, folks. I'm so proud to share this reflection with you, written by my big sister Beth, who got arrested yesterday during a climate action. Storytelling is a powerful way to help people recognize the stakes at hand. When we're willing to put our bodies on the line, it tells those around us that we feel deeply, that we love deeply, that we are deeply moved by what we see happening before our eyes. I hope that Beth's story moves you, as it moves me. - RMC

Why did I risk arrest at a Trans Mountain (TMX) Pipeline construction site yesterday?

Because the workers were cutting down a big, glorious cedar tree.

Because that tree is, in fact, a priceless carbon processing plant that has been in operation for hundreds of years, removing CO2 from the air, totally free of charge.

Because they’re killing this tree (and many others) to make a path for a pipeline expansion that will extract 3 times more fossil fuels – 900,000 barrels of oil per day – from the toxic tar sands, pumping much more CO2 into the air and causing climate chaos.

Because that TMX pipeline path will cut through or under 1300 rivers & streams to reach our beloved Burrard Inlet, where 7 times more tankers will be jostling for space to pick it up. (Nothing could go wrong...)

Because Canadian energy experts say we don’t need new pipelines – we already have enough oil & gas to make the promised just transition to renewable energy by 2050.

Because we can’t keep the climate promises we’ve already made to the world without “turning off the tap.” There is zero future for fossil fuels, and no valid reason to continue subsidizing/expanding them.

Because of my niece and nephew, and the other kids in my life: I want them to grow up healthy and hopeful, without the constant danger and anxiety of the climate emergency.

Because I want to introduce them to all the birds I’ve grown to love, birds threatened by oil spills and the climate emergency. I want them to keep enjoying the wrens who were hopping around me while the police officer read me the injunction yesterday, and the hawk who was wheeling above me.

Because nonviolent direct action can be an act of deep love.

Because the global climate conference, COP26, ends in 3 days.

Because so far all our “leaders” have done is make loophole-laden promises that aren’t legally binding, and vague references to technologies that don’t yet exist.

Because the best parts of COP26 have been the glorious acts of rebellion in the streets.

Because the people risking the most and shouting the loudest on the streets are those who have suffered first and will suffer most in the climate emergency: Indigenous land and water defenders and people from the Global South, whose courage inspires me.

Because, here in the Lower Mainland, the Tsleil-Waututh First Nation has been resisting this TMX pipeline that will pass through their unceded territory, and has done so at great cost and threat.

Because nonviolent direct action can be an act of allyship & reconciliation.

Because I’m a white middle-class woman who’s privileged enough to have no prior trauma around police, court or prison, so I face relatively low risk of abuse when interacting with these carceral systems.

Because arrests provoke conversation and “rouse the conscience of the community” (MLK Jr.), as they have at Fairy Creek. (If you can’t afford the time/$$ to get to the Island to join the Fairy Creek camps, there are opportunities for solidarity and resistance right here in the Lower Mainland!)

Because climate anxiety is isolating and debilitating, but climate action is empowering and healing.

Because yesterday I had the support of three other powerful women who didn’t leave my side during my arrest. I had the support of my wife Danice, who cheered me on and held me when I returned home, and of my sister Rachel (from Eco-anxious Stories), my first and dearest climate change teacher.

Because each of the land and water defenders I’ve been honoured to meet over these last few months could write their own long list of reasons.

Because nonviolent direct action can be an act of solidarity & community building.

Because I believe in a Creator who loves those cedars and birds even more than I do, who blesses and upholds faithful acts that seem small or simple, comparing them to mustard seeds that grow tall, to yeast that leavens the whole loaf.

Because my scriptures tell me that one major purpose of the human race is to learn about, and name, and delight in, and steward, and take responsibility to care for our fellow creatures.

Because I believe there’s still time to reclaim this calling and help co-create a renewed earth.

Because I follow the way of Jesus, lover of sparrows and lilies and fish. His way is never violent, but often costly, since it necessarily puts us at odds with a violent empire. We overcome by having “too many necks for too few boots” (Dr. Willie James Jennings).

Because I’m a pastor at Open Way Church, and most of the time I have no idea what I’m doing, but I’m compelled by Nadia Bolz-Weber’s philosophy of pastoral leadership: “Oh, screw it. I’ll go first.”

Because, while I may have “gone first” in my church, so many faith leaders, past and present, near and far, have paved this way of nonviolent direct action, upholding justice that runs deeper than law. (I’m especially grateful for those I have met and seen in action: Laurel, Emilie, Ruth, Janette.)

Because nonviolent direct action can be an act of worship.

Because yesterday, for two hours, we were in the way, and the tree cutting had to stop.

Because someone else can show up today and stop it again.

And the next day.

Because now that I have your attention, I can ask you to consider joining us.

There are many other ways to resist and participate in this holy mischief. (Message me – let’s talk!)

We are the transition generation.

This is our collective vocation.

All photos by Donna Clark and PJ. Hummingbird art & banners by Brandon Gabriel and Tania Willard.

Learn more at www.stoptmx.ca and by following @stoptmx and @surrey7cedars.